Difference between revisions of "Legionella Control"

From The HILLSIDE
Jump to navigation Jump to search

The mere presence of legionellae in a water distribution system does not necessarily imply a human health risk. For human infection to occur, certain conditions are necessary. These conditions are referred to as the “chain of infection” consisting of six links. All the links have to be present for disease to occur (Diagram: Chain of infection ). The first link, the pathogen, was discussed in Section 1. 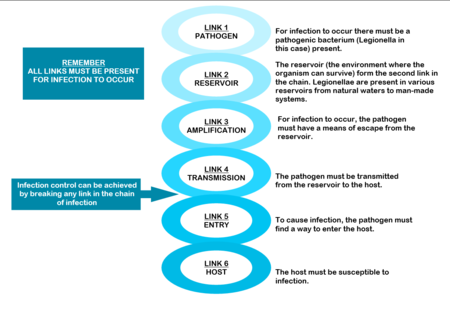 Legionellae are natural inhabitants of water, found a wide range of habitats. They are ubiquitous in streams, lakes and rivers. They also survive in dust, soil and mud. In fact, one of the species, Legionella longbeacheae, is so often isolated from potting soil in Australia that soil has been suggested as the natural habitat of this particular species.[1]

Legionellae from these natural environments can be transmitted to man-made water  systems by various means. For example, from raw water, during water treatment, as part of  post-treatment after-growths within water distribution systems, during building and construction activities and during plumbing repair.[2]

Water sources that provide optimal conditions for Legionella growth can be separated into those containing “non-potable” and those that contain “potable” water. Non-potable water distribution systems

Heat rejection devices like cooling towers, evaporative condensers and HVAC (heating, ventilation and air-conditioning) systems are often implicated as sources of legionellosis. They contain reservoirs filled with warm, recirculating water that makes them ideal for the growth, amplification and dissemination of micro organisms (including Legionella). In a typical water-cooled system air in induced through or blown over, packing material down which water, circulating from a pond under the packing, is allowed to fall by gravity, producing a large wetted surface that cools the falling water.

Water derived from municipal supplies but subsequently stored in cisterns, or conditioned prior to heating, is considered non-potable due to the deterioration in chemical and bacteriological quality during storage. Colonisation of such non-potable sources inside large buildings, such as hotels, factories or hospitals, may be a major cause of legionellosis.[3][4][5]

Legionella levels can rise from very low to very high within short periods of time. The factors that give rise to these fluctuations are not well understood and often very hard to determine. These factors include the age and configuration of the pipes, the degree of scaling and sediment and the potential for biofilm formation within the system increase the risk of contamination. Water temperatures of 25 – 42°C, stagnation and the presence of certain free-living amoebae capable of supporting the intracellular growth of legionellae are often mentioned as amplifying factors in published reports. The biofilm and scale that form on surfaces in water distribution systems provide nutrients for legionellae and protect them from hot water and disinfectants. Some materials used in these systems, for example neoprene washers, are more readily colonised than others (See Table). Building location may also play a role in the colonisation of potable water with legionellae.

Hot water tanks are often colonised with legionellae, especially at the bottom where a warm zone may develop and scale and sediment accumulate.7 Hot water piping, especially deadlegs, presents an additional risk as legionellae thrive in stagnant water.

Legionellae are usually present in low numbers in natural sources. However, certain factors present in man-made reservoirs can promote Legionella growth and amplification. To improve our understanding of Legionella, its potential to cause disease and how to better control the organisms in water systems, we must understand these conditions. The most important factors amplifying Legionella numbers in man-made reservoirs are listed in Table 2.2.

Table 2.2 Amplifying factors for Legionella in man-made sources and reservoirs

After disinfection, municipal water supplies usually travel several kilometers before it reaches the point of use. During this course, disinfectant residuals diminish and there is increasing exposure to potentially biofilm-contaminated piping. Although municipal water systems are required to be disinfected at their points of distribution to conform to existing standards for bacterial disinfection, these standards are based upon the absence of coliform bacteria and do not include any specific testing requirements for Legionella.

After growth and amplification of legionellae to potentially infectious levels, the next requirement in the chain of infection is to achieve transmission of the bacteria to a susceptible host. Modern technology like cooling towers used to recirculate water for air-conditioning and humidifying purposes and other ventilation systems can cause the formation and distribution of aerosols through which the organisms can spread. Transmission can also occur through direct installation, aspiration or ingestion (Table 2.3).

The mode of transmission, inoculum size, particle size and host susceptibility influence the severity of infection. Approximately half of the currently known Legionella species are implicated in disease, but L pneumophila is still considered to be the causative agent in about 80% of diagnosed cases. However, this picture might change as the number of available diagnostic tests increases – it is thus important to regard all legionellae a potentially pathogenic until proven otherwise.